Home of the Brave

It looked as though it could have been a scene from a Hollywood funeral. The weather was cool and clammy, with rain alternately spitting and pouring down. Attendees labored to stay dry and comfortable, shielding one another from the elements with umbrellas, raincoats and open arms. A somber feeling permeated the proceedings.

This was no funeral, though – not in a conventional sense, at least. This was Memorial Day in Needham, and here at Memorial Park, the town had gathered to pay its respects to those who had paid with their lives for freedom. While one could not claim the day to be the perfect epitome of a holiday that’s so often identified with summer’s fun and fancy-free spirit, it was perhaps more appropriate to the actual spirit of Memorial Day.

Caught up in the backyard barbecues, beautiful weather and ubiquitous friends and family that have come to define Memorial Day, it is easy to forget the profound sacrifices the Day exists to honor in the first place.

The dreariness of this day, however, seemed determined not to let the assembled forget. It was a point that was continually reinforced as the parade made its way up Highland Avenue, the flag was raised, “Taps” was played, wreaths were laid, and speakers encouraged gratitude and remembrance.

Matt Borrelli, Chariman of the Board of Selectmen, began by relating the story of his own family’s experiences in WWII and Korea, including the story of an uncle who was killed in the Battle of Saint-Lô.

“The names on our monuments throughout town give a history lesson on the sacrifices shown in multiple conflicts,” he said. “Although these brave men have served at different times, they all had one thing in common: they called our town home.”

State Representative Denise Garlick, who spoke from the heart in the wake of the sudden loss of her nephew, had particularly poignant words of her own.

“We cannot pretend that war is from a time long ago with mythical people called heroes. We must face that war is today, death is now, and the loss is immeasurable. Our grief must be unfathomable. For every serviceman or woman who gives their today for our tomorrow, we must be conscious of the loss and acknowledge that loss to his or her mom and dad, his or her children, his or her community, his or her country, and to us,” said Rep. Garlick, looking out over a silent, sodden crowd.

As Needhamites left Memorial Park, returning to their homes, families and tomorrows, one thing seemed certain: this year’s unique Memorial Day would not be forgotten.

For Memorial Day in Needham, rain dampened participants but not their spirits

Gathered at Memorial Park, around monuments to honor veterans, Needham residents held their umbrellas overhead as they observed Memorial Day.

Since the early morning of this past Monday, May 30, residents had participated in services and ceremonies throughout the town, including a Memorial mass at St. Joseph’s, services at the Police and Fire Station, and flag raisings and wreath placements at several locations. After a parade from Nehoiden Street to the Town Common for another flag raising ceremony and placing of a wreath, the parade culminated at Memorial Park for observances and speeches from local government officials.

“I just feel it’s important to honor and recognize people who have lost their lives and all those who have served to protect our country,” Leigh Doukas, a lifelong Needham resident, said. “[The remembrances] remind you how long the country has had this kind of service from the armed forces.”

Doukas said she attends the Memorial Day events annually and said it is important to not only honor those who put their lives at risk for the public in the military, but also the members of the police and fire departments. 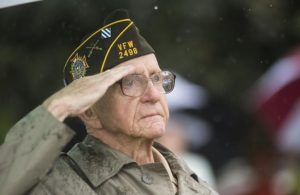 As “Proud to be an American” played over speakers at the park, families of all ages gathered beneath umbrellas to hear the speeches.

Matthew Borrelli, Chairman of the Board of Selectmen, shared his own family’s story of remembrance, saying that four of his uncles and his father had served in the United States military.

“[Memorial Day] is remembrance for those who pay the ultimate sacrifice,” Borrelli said.

While many of his family members served and are remembered as veterans, Borrelli said one of his uncles did not return home from the war.

“His death is still felt by my family today,” he said.

Through letters and pictures, Borrelli said his family is able to remember his uncle and share the legacy of bravery and sacrifice with the next generation, something he stressed the importance of for everyone in attendance.

“Always remember these brave men and women [who lost their lives] and teach the next generation to honor these sacrifices,” he said.

State Representative Denise Garlick also shared the story of a death in her family, the recent loss of her nephew in a car accident on his way to work.

“Every year, it is with heavy hearts that we engage in Memorial Day activities,” Garlick said.

For her family, the loss of her nephew, not a soldier, but a civilian who said goodbye to his family in the morning with the expectation that he would return home to them, reflected the feeling of loss everyone should feel when considering those in the military who lose their lives for their country, who go to work every day knowing they might not come home.